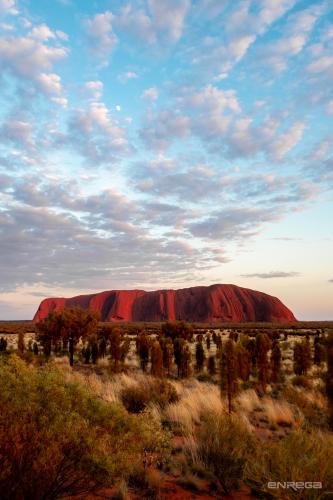 Uluru, also known as Ayers Rock, is a large sandstone rock formation in the southern part of the Northern Territory in central Australia. It lies 335 km south west of the nearest large town, Alice Springs. It is 348 m (1,142 ft) high, rising 863 m (2,831 ft) above sea level with most of its bulk lying underground, and has a total circumference of 9.4 km (5.8 mi). Uluru is sacred to the Pitjantjatjara Anangu, the Aboriginal people of the area. The area around the formation is home to an abundance of springs, waterholes, rock caves and ancient paintings. Uluru is listed as a UNESCO World Heritage Site. Uluru and Kata Tjuta, also known as the Olgas, are the two major features of the Uluru-Kata Tjuta National Park. This photo was taken at sunrise at one of the many viewing platforms that are available to tourists within the national park.