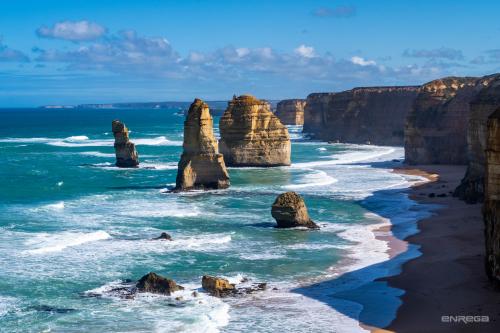 This is a photo of The Twelve Apostles, which is a collection of limestone stacks off the shore of Port Campbell National Park, by the Great Ocean Road in Victoria, Australia. Their proximity to one another has made the site a popular tourist attraction. Seven of the original eight stacks remain standing at the Twelve Apostles viewpoint, after one collapsed in July 2005.Though the view from the promontory by the Twelve Apostles never included twelve stacks, additional stacks - not considered part of the Apostles group - are located to the west within the national park.