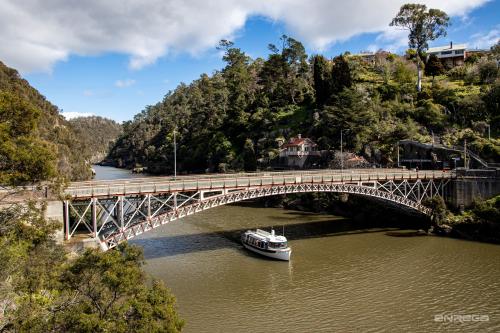 King's Bridge is a wrought-iron bridge crossing the South Esk River at the mouth of the Cataract Gorge in Launceston, Tasmania. Construction of the bridge began in 1864. The bridge span was constructed in Manchester, England and was transported to Launceston for final assembly. At the time it was named the South Esk Bridge and it was the only form of vehicular crossing of that river in Launceston. In 1904, a second, parallel span was added to widen the bridge. This span was almost identical to the original span, but was fabricated locally in Launceston, instead of overseas.

This photo was taken in September 2019 when the Lady Launceston was going underneath the bridge. The vessel is operated by Tamar River Cruises and it's a replica of the original vessel that was built in the 1890's.