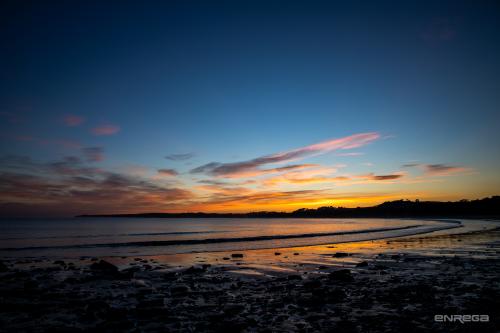 East Beach in Tasmania at sunrise

This is photo taken from the western end of East Beach at sunrise. East Beach is located on the eastern side of Low Head and is the closest surfing beach to Georgetown and Launceston and consequently a relatively popular beach.

The beach commences at the base of Low Head, which extends 2 kilometre to the northwest. It curves to the northeast for 1 m, past the small mouth of Cimitiere Creek, to a cobble-sand foreland tied to rock flats that separates it from the eastern beach. The beach is relatively exposed to westerly waves, which average 1 metre, but can be considerably higher during strong winds. The waves combine with tides up to 3 metres high to maintain a moderately steep sandy high tide beach grading into patches of cobbles along the rear of the beach and fronted by a usually continuous intertidal bar and a wider surf zone usually cut by several low tide rips.

It is backed by a near continuous foredune increasing in height and width to the east, with vegetated transgressive dunes beginning east of the creek. Rock flats derived from reworked Tertiary sediments increase to the east of the creek and contribute cobbles to the high tide beach. There is road access, a car park and caravan park at the western end of the beach.

The Low Head Surf Life Saving Club operated at the beach between 1950 and 1984.