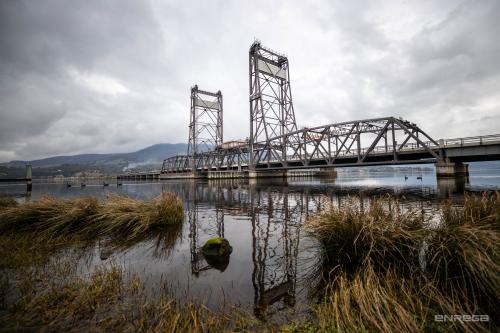 It isn't often the when there isn't a gale blowing down the valley, so it's rare to see the Bridgwater Bridge beautifully reflected in the Derwent River near Hobart, Tasmania.

I discovered this photo opportunity while cycling out to Granton, which is a regular training route for me and so many other cyclists. It was a very calm Sunday morning and when I arrived, I noticed how exceptionally still the water was at the time. I quickly rushed back home to grab my camera and then drove back to take some photos of the bridge before the wind got up again. This photo was taken late morning in July 2020.

The Bridgewater Bridge and Causeway is a road and rail bridge that carries the Midland Highway (A1) and South Railway Line across the Derwent River in Hobart, Tasmania, Australia. The steel truss vertical lift bridge and specially-builtcauseway connect the Hobart suburbs of Bridgewater and Granton. The bridge was completed in 1946 and accommodates a two-lane highway, a single track railway and a grade-separated footpath.

The Bridgewater Bridge was one of the first bridges constructed in Tasmania following British settlement in 1803, and gave its name to the nearby suburb of Bridgewater. Lieutenant-Governor George Arthur commissioned the construction of the bridge and causeway as part of the Launceston – Hobart Trunk Road, linking both Tasmanian towns and providing easier access to farmlands in the interior of Tasmania.

Construction commenced on the bridge in 1829. Operations were supervised by Roderic O'Connor. The causeway, which was constructed first, was built by a workforce of 200 convicts who had been condemned to secondary punishment. These convicts, using nothing but wheelbarrows, shovels and picks and sheer muscle power, shifted 2 million tonnes (2.2 million short tons) of soil, stones and clay. The finished causeway stretched 1.3 kilometres (1 mi), although did not span the full width of the Derwent. The original plan apparently called for a viaduct, but this plan was abandoned and the half-built arches were filled in to form the present causeway.

Construction commenced on the bridge in 1829. Operations were supervised by Roderic O'Connor. The causeway, which was constructed first, was built by a workforce of 200 convicts who had been condemned to secondary punishment. These convicts, using nothing but wheelbarrows, shovels and picks and sheer muscle power, shifted 2 million tonnes (2.2 million short tons) of soil, stones and clay. The finished causeway stretched 1.3 kilometres (1 mi), although did not span the full width of the Derwent. The original plan apparently called for a viaduct, but this plan was abandoned and the half-built arches were filled in to form the present causeway.

Upon completion of the causeway, a punt operated across the deep, navigable section of the river, but could not cope with traffic demands. To resolve this issue, the first bridge across this point of the Derwent opened in 1849. The bridge was designed by the firm of architect and former convict James Blackburn.[3] Being a swing bridge, it could pivot out of the way to allow ships to pass. In the late 1870s, the Launceston-Hobart Railway called for modifications to the causeway so they could lay tracks over it. The causeway required widening and the swing bridge was modified as well.

Construction on the present steel vertical lift bridge across the Derwent began in 1939. It was briefly interrupted by World War II, but was finally completed in 1946. It consists of a long concrete bridge that leads off the end of the causeway, and a steel lifting section just before the northern bank of the river. The lifting section is one of only a few remaining in the Southern Hemisphere, and is the largest of its kind remaining in Australia. The bridge was designed to last a century without replacement. A small control house stands on the lifting section. Inside are the switches and locks which operate the bridge.

Until 1984, the Australian Newsprint Mills (now Norske Skog Paper) at Boyer, near New Norfolk, upstream from Bridgewater, moved all its produce by river. Many barges were used to transport paper from the mill to the storage sheds at Pavilion Point at Hobart, and for this reason the bridge was required to open very frequently. Consequently, a bridge-keeper lived on-site and opened and closed the bridge when required. However, when the decision was made to cease river transportation, an on-site keeper was no longer necessary, so although the bridge can and does still open, bridge openings are now infrequent.

In response to vandalism of the house which contains the bridge operating controls, closed-circuit television cameras were installed along the lifting span sometime between 2003 and 2005.

On 30 October 2006 a fault was found in one of the steel cables holding up the two 170-tonne (190-short-ton) concrete counterweights above the road, forcing the temporary closure of the bridge.[4] This closure caused peak hour traffic delays, mainly along the East Derwent Highway, due to traffic being diverted over the Bowen and Tasman bridges. The cables, which were put in place in 1994, were supposed to have a 20-year lifespan, and as they have lasted barely over half that time.

Between 2001 and 2005, the Australian Government granted A$100 million towards the replacement of the Bridgewater Bridge,[1] soon after the Tasmanian Government decided to build the replacement to the south of the existing bridge. However, after years of inaction the State government has encountered some heritage issues with replacing the bridge and is now[when?] to be replaced as part of the final stage of the Brighton Bypass and Midland Highway upgrade.

Towards the end of 2010, the State government released plans for a new Derwent River crossing, next to the current bridge. The new bridge, when complete, will carry the Midland Highway and the old bridge will be left open for rail, pedestrian and local traffic. While the Bridgewater Bridge is recognised as being limited in its ability to perform the function of the Midland Highway, it also has important heritage values and is recognised as a landmark in the area.

From 2006 until 2010, the lifting segment of the Bridgewater Bridge was out of commission, due to failed maintenance. The State Government spent $14 million to refurbish the bridge and provide it with a further 15 years of life, until a replacement can be built. This refurbishment replaced the vandalised control house and its controls and all of the cabling to raise and lower the bridge. Touted as a "major tourist attraction" with expected regular openings for tourist and private vessels to travel between Hobart and New Norfolk, the bridge refurbishment has been a major embarrassment to the Tasmanian Government. It has opened no more than six times successfully and has caused major traffic delays, including on a well-promoted occasion the lift span raised approximately 14 centimetres (5.5 in) and was stuck in that position for several minutes before being lowered again.[citation needed]

In March 2016, Infrastructure Tasmania published its review of a design and cost estimate for the construction of a replacement structure for the existing Bridgewater Bridge, which considered various options for a replacement structure and provided advice as to the most feasible crossing solution. As part of the 2018-19 federal budget, the Australian Government announced a $461 million grant towards the construction of a new Bridgewater Bridge, representing 80 per cent of the expected total construction cost. The Tasmanian Government is expected to contribute $115 million.[8] Construction was expected to commence in 2019. However, following independent assessment of the project by Infrastructure Australia in July 2019, the evaluation identified a range of issues, which may add to costs and require further work to address, and recommended that the Tasmanian Government revise its business case. The project is scheduled to start design and approvals in 2019, with the design to be agreed by the end of 2020. Substantive construction is expected to commence in 2022 and completion is targeted in 2024.[10] The 1.6-kilometre-long (1 mi) concrete box girder bridge is expected to carry dual carriageways with a clearance of 16.2 metres (53 ft) above the Derwent River