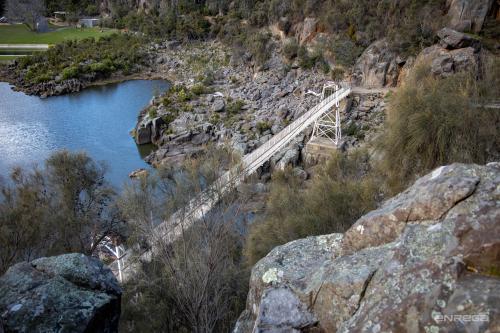 The Alexandra Suspension Bridge spans the South Esk River at the First Basin of the Cataract Gorge in Launceston. It was officially opened on November 29, 1904, and enables visitors to walk from one side of the gorge to the other. The total length is 67 metres, the clear span between the centres of the steel towers is 46 metres. When originally built, the structure was said to be the best of its kind in the Commonwealth. While being light, it is exceptionally strong, and is so well braced that it vibrates only very slightly when walking across the bridge.

This photo was taken from the lookout which is on the hill of the north bank of the First Basin in September 2019.